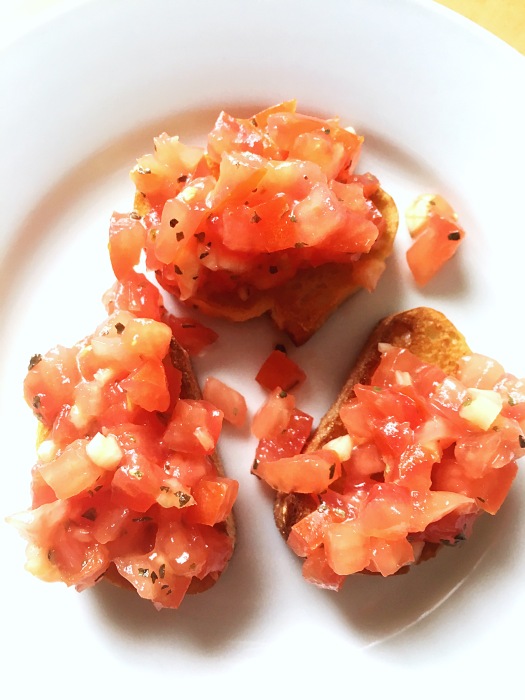 One of my struggles, as a new vegan, is what to bring to potlucks and parties. I hate going to someone’s house empty handed when I’ve been invited over for dinner but I also don’t want to bring something that people are going to think of as ‘rabbit food’ or typical ‘vegan fare’. Bruschetta is the answer!

Last summer, my mother threw a mini dinner party for her friends and made bruschetta, in the most traditional way. This is not the fancy, crazy bruschetta you get in restaurants. It also isn’t that typical homemade bruschetta on huge slices of garlic bread, topped with giant chunks of red, yellow, green peppers and smothered in cheese. This is back-to-basics bruschetta, the way it was meant to be made!

Since that dinner party, I’ve adapted the recipe a little and have managed to popularize it with my coworkers. I now bring it to any parties or potlucks to which I am invited. Not only does it guarantee that I have something to eat but everyone else loves it too. I usually have to elbow my way in to get some of my own dish! 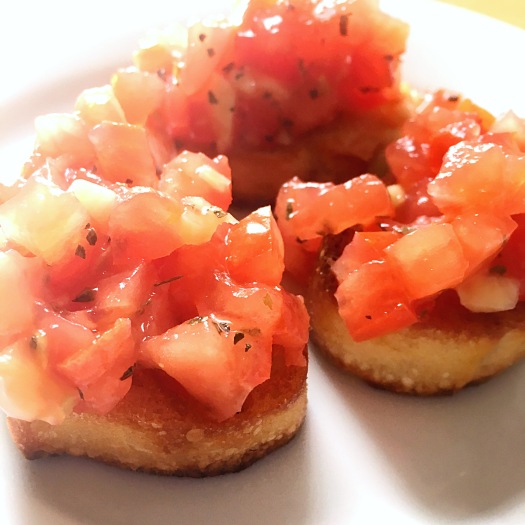 1 1/2 tbsp of dried basil leaves (fresh is nearly impossible to find here! 3 tbsp of fresh if you have it)

3-4 garlic cloves, minced (I love garlic so I use 4 large ones but you do you)

Hi, I’m Jil. Thanks for visiting! If you like recipes, ramblings and general vegan fare, you’ve come to the right place!

There was an error retrieving images from Instagram. An attempt will be remade in a few minutes.